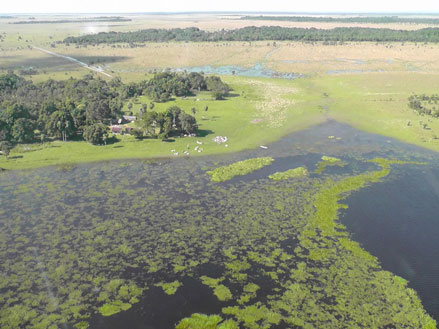 Early this year, Armonía celebrated doubling the size of the Barba Azul Nature Reserve for the Critically Endangered Blue-throated Macaw

“Doubling the size of the Barba Azul Nature Reserve means that we have just doubled the odds of saving threatened species that desperately require our conservation efforts. Species such as the Giant Anteater, the Blue-throated Macaw, the Cock-tailed Tyrant and the Buff-breasted Sandpiper are finding their habitat dwindling yearly. It is great to know that we will have a large enough area that we can protect significant populations of these species.”

The Beni tropical savanna is an area twice the size of Portugal and almost entirely ranched; it has undergone hundreds of years of logging, hunting and cattle ranching. The Barba Azul Nature Reserve – the only protected area within the ecoregion – is holding back a tide of overgrazing, annual burning and the planting of exotic grass species. While the Omi River within the reserve is the only year-round water source for a massive area and many mammals depend on this clean water through the dry season. 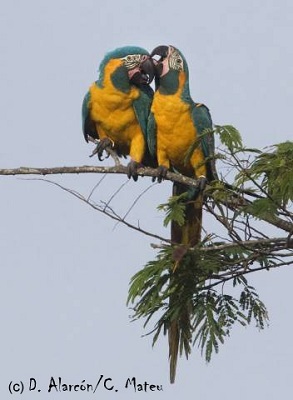 What it takes to save a species

Armonía created the Barba Azul Nature Reserve in 2008 and it is the only site in the world where the Blue-throated Macaw, a Critically Endangered species, is offered protection. The macaw depends on the motacu palm (Attalea phalerata) that grows on the reserve’s forested islands and feed primarily on the motacu palm nuts. But creating the reserve to protect the macaw’s habitat is just the first step in a much greater push to save the species.

It is impossible to ensure the long-term, ongoing protection of the reserve without employing reserve rangers, who are out in the field physically protecting the Beni savanna and its wealth of wildlife. Our ranger Rene Cartagena is one member of a dedicated and hard-working team and we are delighted that he is being supported by the Keepers of the Wild, a ranger program by our partners WLT that funds his salary and equipment.

An important part of Rene’s work at the moment is installing artificial nest boxes within the reserve. Although Blue-throated Macaws spend half the year foraging and roosting in the reserve, at the moment they do not breed in the safety of the protected area. Instead, the pairs tend to disperse widely throughout the region’s farmland in search of a suitable site. To breed successfully, Blue-throated Macaws need to find two specific conditions: isolated forest islands away from climbing predators and trees with large cavities in their trunks so they can nest within them.

These conditions were abundant in the past, when trees within the Beni Savanna were left to grow old and then rot. But 150 years of intensive cattle ranching has cleared most old growth, large trees. We believe it will be possible to entice the macaws to breed in the safety of the reserve by installing artificial nest boxes.

As well as safeguarding and improving the habitat from Blue-throated Macaw, we are running a nationwide campaign to tackle the illegal pet trade. After 7 years of raising awareness across the country, people of Bolivia now consider is shameful to be trading in the bird. While last year, the Bolivian national government declared the Blue-throated Macaw a national heritage species, giving it greater legal protection.

Despite these successes, there is much more that needs to be done to save the species from extinction…