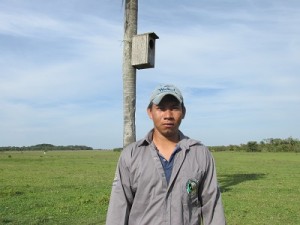 Rene Cartagena, from the Tacana indigenous village of northern Bolivia, is saving the Blue-throated Macaw from the edge of extinction

Where the foot of the Amazon basin reaches the Beni savana, ranger Rene can be found out in the field physically protecting the Barba Azul Nature Reserve and its wealth of wildlife.

The reserve is the world’s first protected area for the Critically Endangered Blue-throated Macaw, while providing a safe haven for threatened species like the Jaguar, Puma, Maned Wolf and Giant Anteater.

Rene was very keen to work for Armonía to help protect the Barba Azul Nature Reserve, which is close to where he grew up in the Tacana indigenous village. He said:

“It is important to me to be in a natural and peaceful place, working to provide for my family while helping to protect threatened species.”

We are delighted that Rene’s salary and equipment is now being funded through Keepers of the Wild, a ranger program by our UK partners the World Land Trust (WLT). It is impossible to protect the Barba Azul Nature Reserve without a dedicated team of reserve rangers, so this support from WLT is ensuring the long-term protection of the Blue-throated Macaw and a wealth of other wildlife. 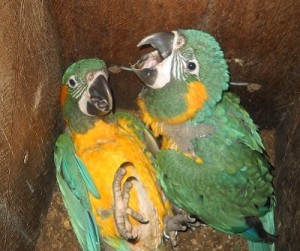 The major problems that face the reserve are poaching, cattle, fires, and the lack of suitable nesting sites for the macaw. Rene and his co-workers Hernan and Rosario play a vital role in tackling these issues by patrolling the reserve, removing invading cattle, maintaining firebreaks and fences, clearing trails, and installing nest boxes.

The nest box program is an important new strategy to ensure the survival of the Blue-throated Macaw. Although the macaws spend half the year foraging and roosting in the Barba Azul Nature Reserve, at the moment they do not breed in the safety of the protected area. Instead, the pairs tend to disperse widely throughout the region’s ranch land in search of a suitable site.

Rene and the team believe it’s possible to entice the macaws to breed in the safety by installing artificial nest boxes. They installed 67 boxes on the islands in 2014 but anticipate that the macaws will take time to adjust; the breeding season starts around December and it might take over a year for the birds to accept the boxes as viable nest sites.

But Blue-throated Macaws are intelligent birds and much of their behaviour is learnt from their parents, their environment, and the behaviour of others. The program staff are confident that once one pair of macaws successfully breed in the boxes, then their offspring and other adult birds will watch, learn and copy.