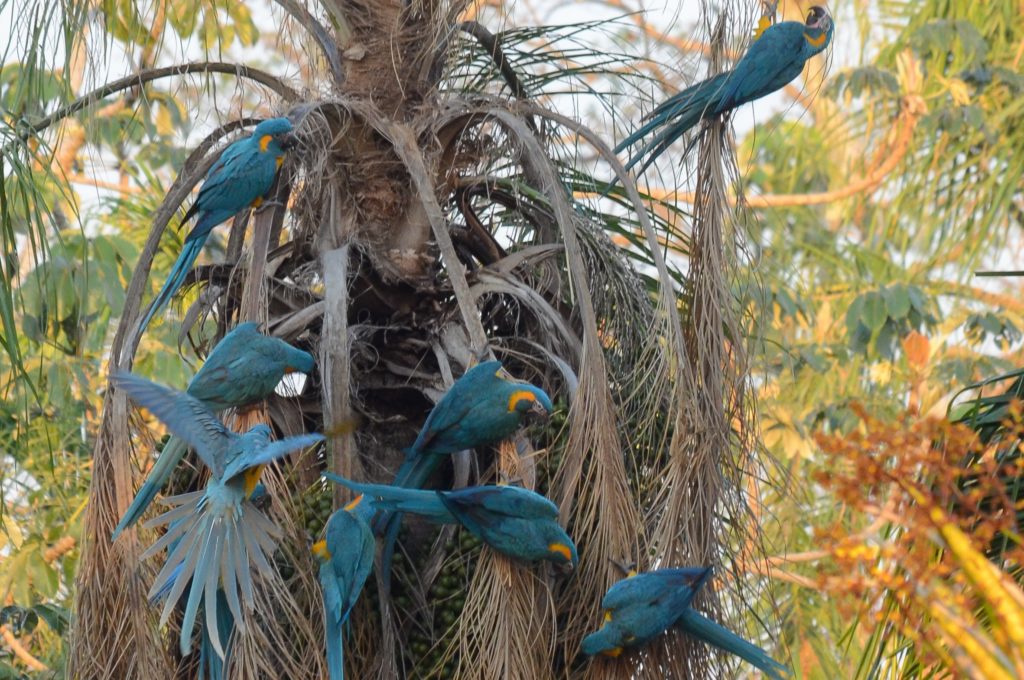 In September 2017, reserve coordinator Tjalle Boorsma sighted a record number of 155 Blue-throated Macaws at the Barba Azul Nature Reserve’s roost. The sightings of large flocks confirms a steady increase of the population of this Critically Endangered macaw at our reserve.

The Blue-throated Macaw is an endemic species to the Beni Savanna in northern Bolivia, whose population is estimated around 250-300 (BirdLife International)individuals remaining in the wild. The Blue-throated Macaw was pushed to the verge of extinction by illegal pet trade and habitat loss. In 2008, with the support of our partners, Armonía created the first protected area for the macaws at Barba Azul Nature Reserve.

In 2016 Dutch researcher, Fabian Meijer registered 118 Blue-throated Macaws at Barba Azul. That record was broken by this year’s sightings of 155 individual observed in a single sighting by the Barba Azul Nature Reserve coordinator Tjalle Boorsma.

The birds came in to the roost in flocks of 15-20 individuals. Soon I realized this was the highest ever sighting of Blue-throated Macaws.

During the latest Blue-throated Macaw monitoring’s we observed a significant number of juvenile individuals, a clear indication of the successful breeding. 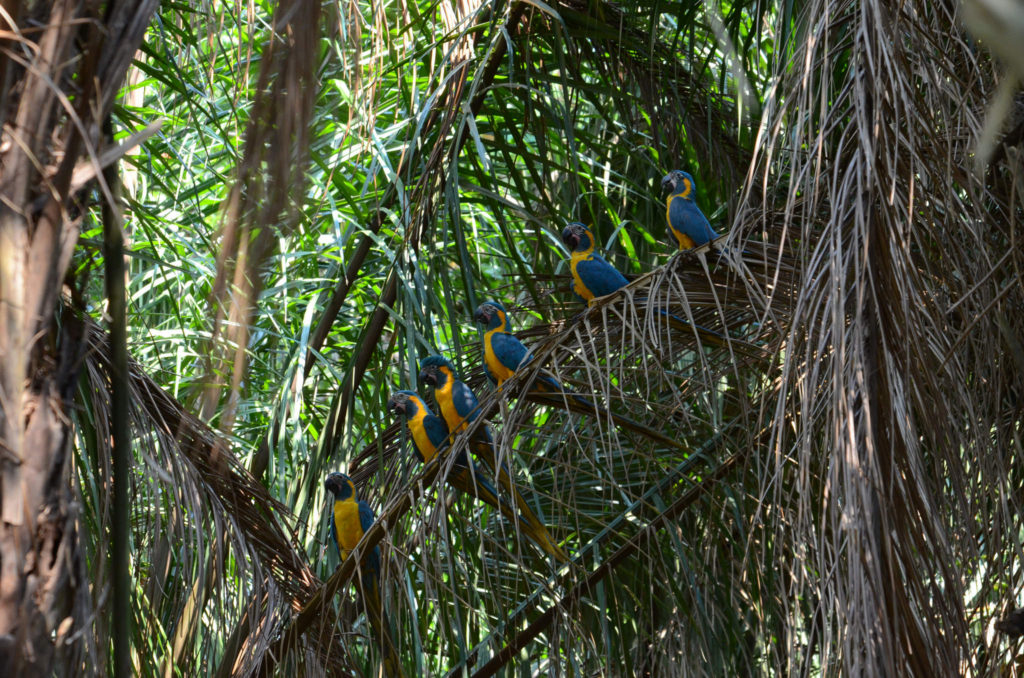 “This record sighting of Blue-throated Macaws confirms that the species shows a positive population trend during the last decade” – added Boorsma.

On the 11 000 hectares (27 182 acres) of Barba Azul Nature reserve, Armonía successfully protects important roosting and feeding grounds for this species.  We were able to significantly improve the firebreaks surrounding the reserve’s perimeter and important forest areas crucial for the Critically Endangered Blue-throated Macaw. The project to restore degraded forest islands of the Barba Azul Nature Reserve also has been successfully completed, with a total of 700 Motacu Palm saplings being planted across seven forest islands.

From May to October large numbers of Blue-throated Macaws can be observed at Barba Azul Nature Reserve, where sightings of 50 plus birds are frequently seen by birdwatchers and researchers.

Despite the scientific data collected about these rare birds, a key question still remains to be answered. Where do these birds breed? The question was partially answered this March, when an Armonía-led expedition discovered a new nesting area of the species 40 kilometers north of the Barba Azul Nature Reserve. This was a major step towards ensuring the protection of the full lifecycle of the Blue-throated Macaw. As we know where some of the birds nest, we can work successfully to continue protecting and restoring its habitat.

Saving endangered and declining birds is imperative to our mission. In 2017, we joined forces with partners across the Western Hemisphere to put the breaks on bird extinction. And, we couldn’t have done it without you!  Consider aiding our joint efforts with American Bird Conservancy and stay tuned for updates.

Feel inspired? Join our fight to save birds this Giving Tuesday. Your tax-deductible donation will support our work with partners like Asociación Armonía to help the birds most in need of conservation.

If you would like to support the Blue-throated Macaw program – to save this emblematic species and a wealth of other wildlife – please donate.