Home News Nest boxes: a lifeline for the Blue-throated Macaw

Nest boxes: a lifeline for the Blue-throated Macaw 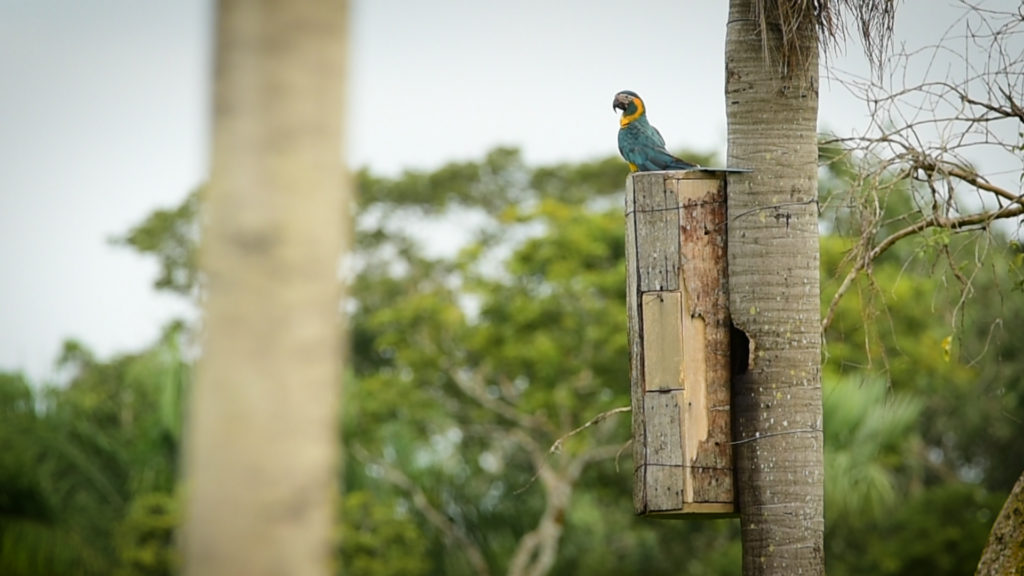 71 Blue-throated Macaw chicks has fledged from our nest boxes in 2017 (Photo: Aidan Maccormick)

Two decades ago little was known about the lifecycle, reproduction and diet of the Blue-throated Macaw, an endemic species to Beni Savanna of northern Bolivia. All we knew was that the Blues were decimated by poachers and their breeding grounds reduced due to overgrazing and seasonal burnings by cattle-ranchers.

Realizing the imminent danger that this Bolivian endemic macaw was facing, in 1995 the Asociación Civil Armonía designed and implemented a conservation program to protect this bird.

In the Beni Savannah the high frequency and magnitude of human-induced fires utilized to stimulate new grass growth have frequently eradicated trees that the Blue Throated Macaw uses for nesting.  Additionally, the persistent activity of wildlife traffickers searching for this species in clusters of nesting trees in order to satiate the demand of macaw collectors has made it difficult for the macaws to find adequate nesting sites.  To facilitate the reproduction of Blue Throated Macaws, in 2005 Armonía installed 20 artificial nest boxes south of Trinidad within the municipality of Loreto. 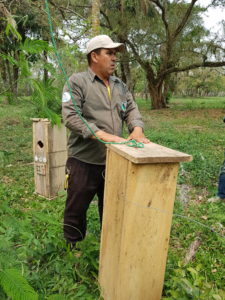 During the second year of the project we registered our first success: two pairs of Blues breeding in our nest boxes. The first chick to fly from our nest boxes revealed the great potential of the initiative in restoring the population of the species.

Thirteen years have passed since Armonía installed the first artificial Nest boxes. During this time we have registered 71 fledglings that have become integrated within the wild Blue-Throated Macaw population.   This is a significant addition to a population that BirdLife and IUCN estimate to be at 300 individuals. Year after year we have improved the design of the nest boxes and we have implemented a rigorous monitoring protocol that individually identifies returning breeding pairs as well as bands the chicks before fledging.

In October of 2017 we built an additional 80 optimally designed nest boxes that have been erected to welcome new breeding macaws in December. 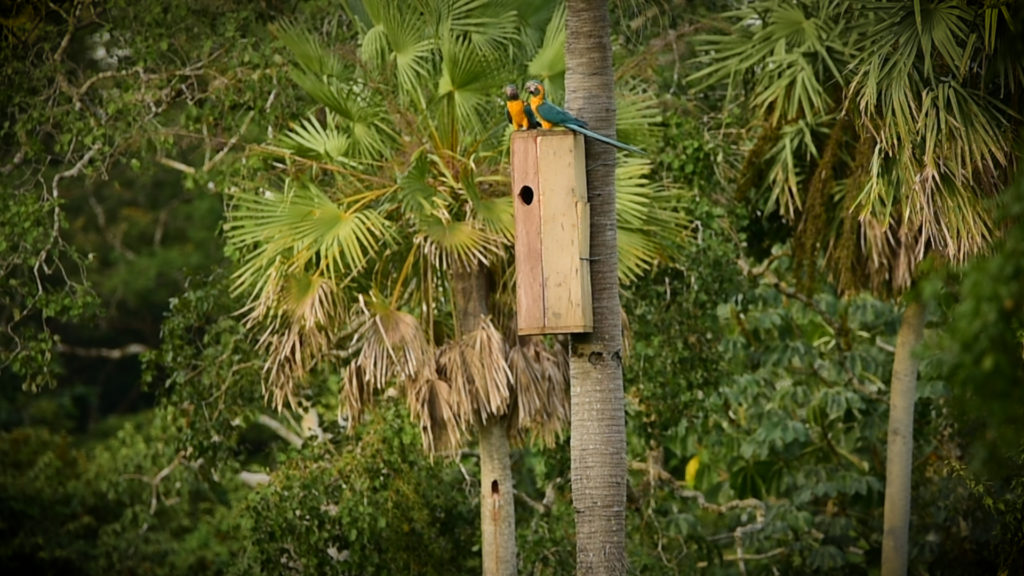 South from the small town of Loreto, Esprenacita Ranch is currently the most important known breeding place of the Blue-throated Macaw. Armonía forged a solid cooperation with the owner of the ranch so we can fully protect the nest boxes and no one can disturb the breeding blues.

The Nestbox Program needs continued support to cover maintenance costs and to employ local people who are committed to the preservation of the species.  Cesar Flores Aguilar is one of them, his knowledge of the terrain and ability to build, maintain and monitor the nest boxes is crucial to the success of the project.

These successes have been made possible by support from Bird Endowment and Loro Parque Fundación (until 2016) and the Mohamed bin Zayed Species Conservation Fund.  In 2018 IUCN Netherlands and Artis Amsterdam Royal Zoo will join the list of supporters for the Blue-Throated Macaw Nest box program.

Armonía is incredibly grateful for the unconditional support from Laney Rickman.  Laney found the Bird Endowment and was its executive director until August of 2016.  Laney was a very committed person with a passion and strong love for this species.  Armonía will always maintain present the memory of his determination, passion and actions.  Sadly, Laney passed away in August of 2017.

A memorial service in his honor will take place in February of 2018.  The American Bird Conservancy has established a fund in Laney’s honor to raise funds for the Blue-Throated Macaw Nest Box Program.  Money can be donated through this link:  https://abcbirds.org/rickman-memorial-fund/.

Please consider supporting the next box program and Armonía’s conservation work with a donation. Thank you.