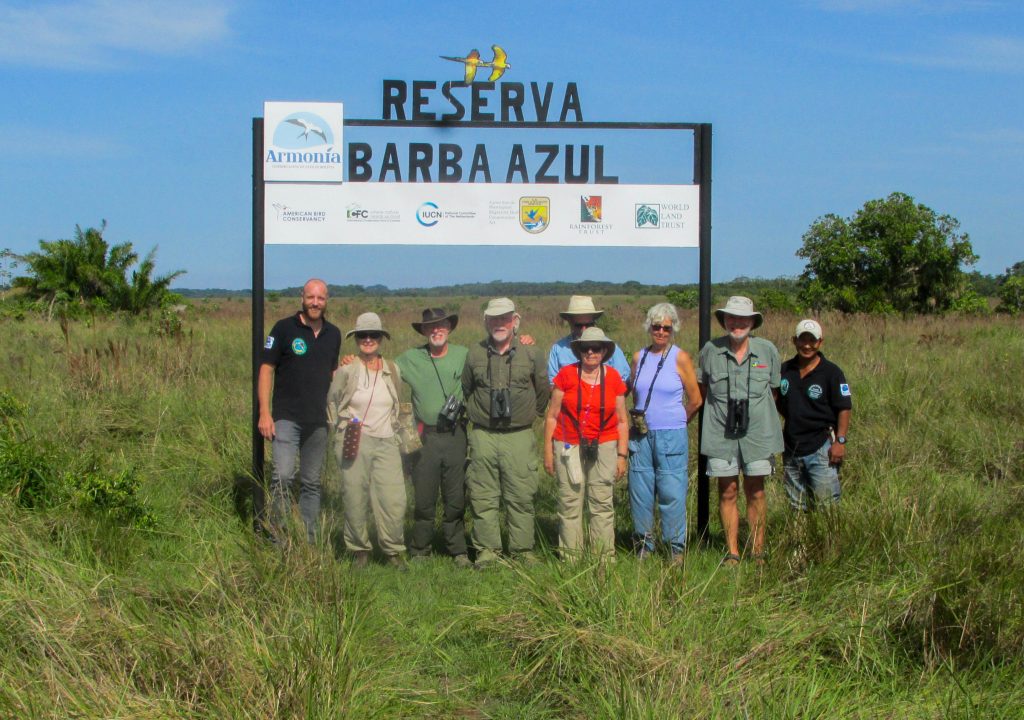 What does it take to protect the Critically Endangered Blue-throated Macaw and its Llanos de Moxos habitat? Our periodic reports shine light on all that is involved in understanding the species, protecting and improving the ecosystem, finding balance with human activities, working towards environmental and economic sustainability, and adjusting the new challenges each year brings.  These reports are a testament to the progress that has been made and outline the new goals that are set, keeping all who are interested up-to-date on what goes on at Barba Azul Nature Reserve.

While 2020 has brought unexpected events, there has been plenty of good news at Barba Azul. February, March, and April all experienced highest-ever counts of Blue-throated Macaws for the month. Expeditions in February and March led to 10 nest discoveries, three previously-unknown breeding site discoveries, 100 macaws present in the rainy season, and a clearer understanding of breeding requirements.

Read the full May 2020 Update Report»

It has been a spectacular year for Barba Azul Nature Reserve. Conservation strategies have been validated by results: overall numbers of large predators increased, with 5 species seeing populations more than double over three years. Blue-throated Macaws were both attracted to set up house in nest boxes and successfully monitored using satellite telemetry tracking. Tourism infrastructure was completed after five years of effort. A new conservation ranching initiative was implemented and has quickly shown positive outcomes.

It would be too early to sing victory, but while wildfires rage Bolivia, our improved firebreaks at Barba Azul Nature Reserve seem to prevent fires entering the reserve! We also have other exctiting news for 2019. Three pairs of Blue-throated Macaws were observed investigating our newly placed nestboxes, and were seen exploring the cavities, chasing each other from the boxes. The construction of new eco-tourism facilities is advancing fast too.

Barba Azul Nature Reserve is completing the long-awaited dining facility supported by American Bird Conservancy and International Conservation Fund of Canada, one of the remaining infrastructure constructions needed to complete our tourism offer. It is located looking over the beautiful Omi River and constructed as a traditional “maloca” to keep temperatures pleasantly cool even in the hot Beni savanna ecosystem.

The annual rainy season (November to March) flooding of the Beni savanna tall-grass in the Barba Azul Nature Reserve is an important phenomenon of this unique ecosystem. This is also the time that the macaws return to Barba Azul in small groups, often pairs with juveniles. The first Blue-throated Macaws arrived on the 20th of February.

The start of the 2017 Blue-throated Macaw conservation season is highlighted by the discovery of the natural breeding grounds of the Macaws. We finally have a better idea where the Barba Azul Nature Reserve Macaws migrate during their wet season breeding period. In March, the first big groups of Macaws returned to Barba Azul and where we recorded at least 10 juveniles. We are pleased to know that the birds are reproducing successfully and find their save haven back in Barba Azul during the dry season.
Read the full 2017 August Update Report»

The start of the wet season also is accompanied with the local migration of Blue-throated Macaws to their wet-season breeding grounds. The Barba Azul Nature Reserve had the highest ever count of Blue-throated Macaws in the Beni. An impressive number of 118 individuals were counted, presenting approximately half of the entire population, dependant on the reserve to forage and roost during the wet season.
Read the full 2016 November Update Report»

Barba Azul Nature Reserve finds itself in the heart of the 2016 dry season in the Beni savanna of Bolivia, already marked as one of the driest in decades given the lingering impacts of the “El Nino”. This results in excessive burning of natural pasture lands to ensure the re-sprouting of grasses all throughout the Beni, Santa Cruz and La Paz Department, threatening local ecosystems and adding greenhouse gasses to the atmosphere. These fires are a direct threat to the Barba Azul Nature Reserve and extra protection measures have to be undertaken.
Read the full 2016 August Update Report»

November marks the start of the Bolivian rainy season which is accompanied with heavy rainfall in January, February and March. The El Nino of 2016 was recorded as one of the hottest in human record. It made this year’s wet season very unpredictable with heavy rainfall in October and very few rain storms in the heart of the rainy season.
Read the full 2016 May Update Report»

Ground level management has been radically improved through the purchase of a new John Deere tractor. After the Armonía tractor arrived at the Barba Azul Nature Reserve in July, it proved itself completely indispensable. In a time span of half a year we were able to complete large protection and maintenance projects that before were seen as being painstakingly troublesome.
Read the full 2015  Annual Update Report »

August to November is the main period of the dry season where much of the heavy work needs to be done. Heavy materials like fencing posts and timber for window frames have been transported to Barba Azul. In this period also the hard physical work has to be done like creating fire-breaks, large trail systems and runway maintenance with the great help of our newly purchased tractor.
Read the full 2015  November Update Report »

This period will always as the point where we were finally able to properly manage the Barba Azul Nature Reserve- and it is all thanks to that green and yellow beauty. We will forever be thankful for the support of American Bird Conservancy and International Conservation Fund of Canada for making a non-sexy priority become a reality.
Read the full 2015  August Update Report »

February to April in Bolivia are the heavy rainy season months where a lot of activities are stalled because of poor roads (read mud), strong rains, and flooding. This is also when the Bluethroated Macaw breeds, which complicates things. This year was a more typical flooding season in the Beni, without exaggerated flooding, but the rainy season appears to be extending. This will mean heavy truck usage might not be possible until July.
Read the full 2015 June Update Report »