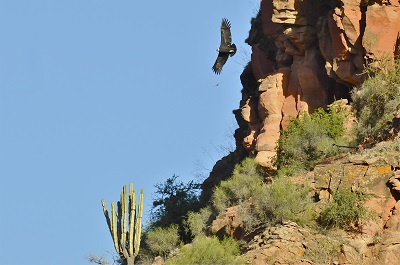 The Andean Condor is Critically Endangered throughout the northern Andes – from Venezuela, Colombia and into Ecuador – but is abundant in the southern Andes, from Argentina to Chile.

In Bolivia, this gigantic vulture is considered vulnerable to extinction by the Ministry of Environment and Water, but more research is needed into the population size within the country.

It is threatened by persecution, as local people from the high Andes believe it kills livestock. People also kill the condor for its body parts, as they are believed to posses medicinal and mystical properties.

In 2013, Amonía conducted the first regional population census throughout the eastern Andean slopes of central to south Bolivia. We also carried out educational campaigns to raise the awareness with decision makers about the threats facing the Andean Condor.

Our results show that there is an abundant population in the eastern slopes of the Bolivian Andes. The highest population density of 99 individuals was recorded in the region of Omereque, close to our Red-fronted Macaw Nature Reserve.

The following year, we conducted a new population study to include the western Bolivian Andes. Now we can begin to estimate the population size of this species in Bolivia, as well as the population structure (sex and age ratios).

This fieldwork will help identify the key areas where this species contains high population densities, so that we can work on a strategy to protect these regions.

We are collaborating with the Wildlife Conservation Society (WCS) to better understand the conservation status of the Andean Condor across the country, so that a group of Latin American specialists can develop a regional plan to protect the species into the future.

We are very keen to continue this research into the population numbers and conservation status of the Andean Condor in Bolivia. It will give us crucial information on what regions of the country need to be protected for the species.

The Andean Condor program needs support to fund this research and run an educational campaign to end the persecution of the species.

If you would like to support the Andean Condor program – to protect this majestic species – please donate.