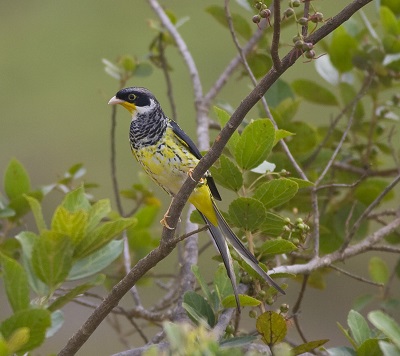 In the Andes of north-western Bolivia, the Palkachupa Cotinga hangs onto survival. This Endangered species has a single, very small population that is found nowhere else on Earth.

Here at Armonía we have created the world’s first nature reserve to protect the species, while developing a close relationship with local Leco indigenous communities so we can work together to secure its future.

For almost 100 years, the Palkachupa Cotinga was thought to be extinct. In 2000, researchers from Armonía rediscover the species. Yet the population only numbers about 600 and is declining rapidly, due to the large-scale clearance and burning of its savanna habitat for cattle-ranching and agriculture.

To save the species from extinction, we urgently need to increase the protected area to save more of the savanna habitat, while engaging local people in conservation actions.

Yet the Leco indigenous communities of Atén, who share their home with the species, live in poverty and must use the land to feed their families. How can they afford to care about the extinction of a bird? To overcome this problem, we are directly linking nature’s protection with improved living standards and livelihoods.

If our conservation programs across Bolivia are to become successful long-term, we must understand the needs of our people, especially poor and marginalized communities. This is why the empowerment of the Bolivian people is central to our mission.

Discover the 3 main ways that Armonía is saving the Palkachupa Cotinga, while empowering indigenous communities:

If you would like to support the Palkachupa Cotingaprogram – to save this Endangered species and help empower indigenous communities – please donate. 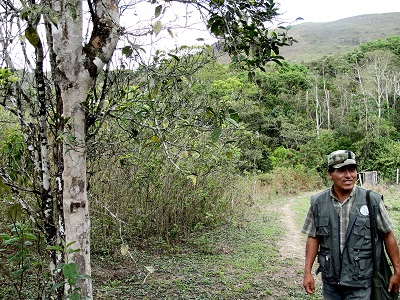 Armonía have created the 130 acre (53 hectare) nature reserve near to the indigenous settlements of Atén, where the world’s largest known population of Palkachupa Cotinga is found. The reserve protects the species’ most important breeding sites, as well as safeguarding a watershed so that local communities continue to have access to clean water. We are developing a reforestation program to improve the reserve’s habitat, which has been degraded through cattle grazing, and monitoring the Palkachup’s nests for an insight into the reproductive success of this species.

Despite the achievement of creating the reserve and engaging local people, 130 acres of protection is not enough to support a viable population of Palkachup. Habitat destruction in this region is escalating at an alarming rate, with forests being logged and the savannas being cleared through annual burning to create cattle pasture. We urgently need to create more protected areas for the species.  One way we are achieving this is through the empowerment of the Leco indigenous people. 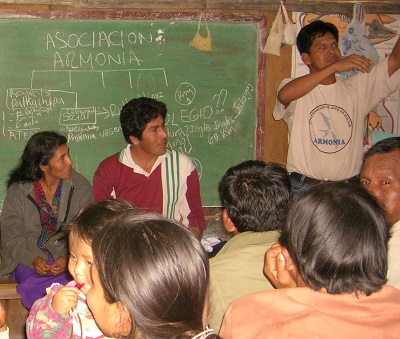 Armonía has developed a strong relationship with the Leco indigenous communities of Atén and CIPLA (the governing council of the Leco people of Apolo), and have successfully engaged them in conservation activities. But we know that we must provide alternative, sustainable livelihoods if we are to protect the savanna habitat for the Palkachupa Cotinga to survive.

As a first step towards this, in 2015 we launched a community-based beekeeping program within the Palkachupa Nature Reserve, where we are running beekeeping and honey production workshops. Once the nature reserve is solidly established as an area to protect native forest and to produce honey, the ownership and management of this land will be transferred to the community of Atén. This is a critical step in empowering the Leco indigenous people and giving them the authority to sustainably manage their land.

We plan to expand the program to encompass other fragmented forest areas, where the Palkachupa Cotinga can be found. The aim is to engage over 18 Leco communities, reaching over 3,500 people.  In this way, we will create a network of community-owned protected forests; these nature reserves will provide suitable habitat for the Palkachupa to secure its survival, while the people will be able to produce honey as an alternative, extra income.

But we do not want to stop at honey. We plan to continue diversifying the livelihoods of the Leco people through the development of a community-based ecotourism project. Atén is a beautiful region that offers wildlife photographers, bird watchers and other nature lovers the unique chance to observe several rare bird species that cannot be seen in other regions of South America.

Although this program is in its initial phase, we have vast experience of empowering indigenous communities by improving livelihoods and living standards through our Red-fronted Macaw program. With the right support, we are confident that we can achieve the same level of success for the Leco indigenous people. 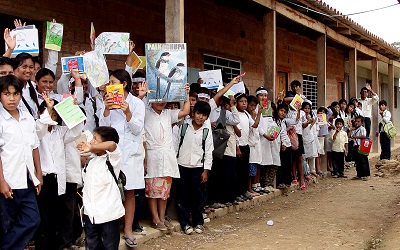 Since the rediscovery of the Palkachupa Cotinga in 2000, Armonía has been running an intensive educational campaign with the community of Atén. The aim is to raise awareness about the uniqueness of this bird species and the important role the reserve’s forest plays in regulating underground water. Now the community realizes their water supply is strongly linked to forest conservation and takes great pride in caring for their Palkachupa.

Our educational campaign included constructing a new building at the school in Atén; it provides a space for our presentations and workshops with the schoolchildren, while helping Atén accommodate an increasing student population.

In the future, we will create and manage a tree nursery within the Palkachupa Nature Reserve in collaboration with the school. The aim is to teach students about tree identification, ecology and botany. We will also train students in the practical skills needed to produce saplings and improve soil health. The long-term aim is for the nursery to produce enough saplings for restoration activities on ranches throughout the region. Most importantly, the students will grow up with greater knowledge and skills to manage their natural resources sustainably.

The Palkachupa Cotinga program is in the initial stages of an ambitious expansion plan; it urgently needs greater support to fund the ongoing protection of the reserve, to help support the Leco indigenous communities, and to increase the reach of our educational campaign.

If you would like to support the Palkachupa Cotinga program – to save this Endangered species and empower indigenous people – please donate.