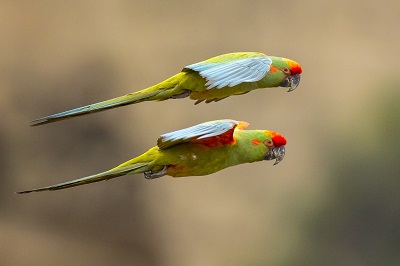 The Red-fronted Macaw (Ara rubrogenys) is an Endangered species from a small region in the Andean valleys of south-central Bolivia. It lives nowhere else on Earth.

With the support of indigenous communities, here at Armonía we have created a protected area for the largest known Red-fronted Macaw breeding colony in the world.  But this is just the first step in securing the future of the species, while empowering local indigenous people.

There are only about 1,000 Red-fronted Macaws left in the wild. The species is threatened by the destruction of its dry forests, poaching to supply the illegal pet trade, and persecution by local farmers because they eat crops (maize and peanuts). We know that we must create behavior change across Bolivia to tackle the illegal pet trade and the persecution of the macaw. Understanding the needs of the Bolivian people, especially poor and marginalized communities, is crucial to creating change and saving the species from extinction.

We need communities to become actively involved in the conservation of their natural heritage, as it is the only way to ensure the long-term protection of Bolivia’s habitats and wildlife. Yet many people in our country live in desperate poverty. They worry about how they will feed their children. Why should they care about the extinction of a bird?

To overcome this problem and successfully achieve community engagement, we have directly linked nature’s protection with improved living standards and livelihoods. The empowerment of the Bolivian people is central to our mission.

Discover the 4 main ways that Armonía is saving the Red-fronted Macaw, while empowering indigenous communities:

If you would like to support the Red-fronted Macaw program – to save this Endangered species and help empower indigenous communities – please donate. 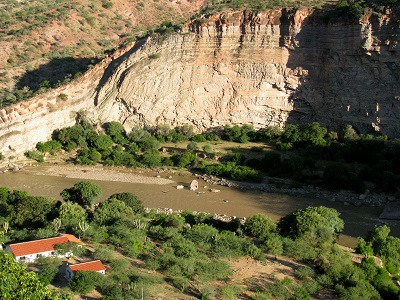 The dry forests of the Red-fronted Macaw Nature Reserve are nestled in the Andean valleys of south-central Bolivia. Together with three Quechua indigenous communities, Armonía established this 124 acre (50 hectare) reserve in 2009. It protects the largest known breeding colony of Red-fronted Macaws in the world. By co-running the reserve with local communities, we are empowering the people and demonstrating how nature’s protection can improve living standards and livelihoods.

The spectacular sheer cliff face that dominates this landscape is the main breeding site of the macaw. For much of the breeding period, the area is full of activity as the macaws are joined by Mitred Parakeets, Yellow-chevroned Parakeets, Blue-fronted Parrots, and Cliff Parakeets, as well as visiting Andean Condors and Peregrine Falcons. There have been 121 bird species recorded at the reserve and many are easily spotted flying back and forth from the cliff face.

Despite creating this important protected area for the Red-fronted Macaw and a wealth of other wildlife, we know that we must create behavior change across Bolivia to tackle the illegal pet trade and the persecution of the species to secure its future survival. The Red-fronted Macaw is still threatened by persecution throughout most of its range, as many local people view the bird as a crop pest; birds often resort to eating crops such as peanuts and corn, especially outside the breeding season, as natural food plants are increasingly scarce.

The species is also a victim of the illegal pet trade; many Bolivians live in desperate poverty and the price a bird can fetch on the market is too great a reward to miss.

Most people in the country are unaware of the importance of the Red-fronted Macaw; that it is an Endangered species that can only be found in Bolivia. We are conducting a wide-ranging education campaign with 3 main aims:

We have begun by raising awareness in schools across the region through educational workshops. Thanks to this, the municipal government of Omereque declared the Red-fronted Macaw their most important natural heritage species.

We have also been collecting data on the trafficking and persecution of Red-fronted Macaws throughout its distribution; there was no information available before and our goal is to identify the areas where this species is most vulnerable to poaching and/or persecution. We are establishing a conservation action plan for the species, in collaboration with the Dirección General de Biodiversidad, the government bureau in charge of biodiversity issues.

This is just the initial stage of reducing the threats to the Red-fronted Macaw, but we have achieved great success with campaigning in the past, having significantly reduced the illegal trade in Blue-throated Macaws across the country. The people of Bolivia now consider it is shameful to be trading in the species. While in 2014, the Bolivian national government declared the Blue-throated Macaw a national heritage species, giving it greater legal protection.

With the right support, we are confident that we can achieve this same level of success with the Red-fronted Macaw and secure the future of the species. 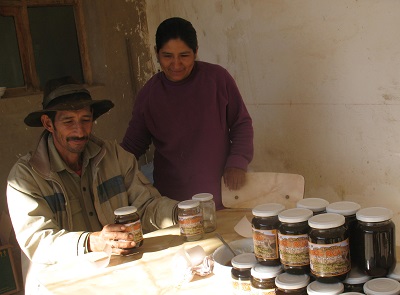 We work with local Quechua indigenous communities to diversify their agriculture and income streams, as additional benefits and incentives for conservation. The main 4 ways we support them is by providing training workshops in:

Beekeeping has become an important activity for numerous families within the Quechua indigenous communities and by selling their honey at local markets and fairs it has provided poor families with an alternative source of income. We have also trained over 24 beekeepers to produce popular products derived from honey, so they can tap into different and more lucrative markets. The next important step is to obtain a legal framework for the association; with this the communities can apply for governmental certification and sell their honey products at a higher price in supermarkets.

We have provided communities with seeds of a papaya variety adapted to local conditions, so they can sell the fruit as an alternative and extra income. In the future, we plan to give training workshops in nursery management so that the communities can produce their own seedlings. Each farmer pays a small amount to become a member of the project and this fund is administrated by a committee of representatives from each of the communities. It will be used to buy more papaya seeds or to strengthen other agriculture initiatives. In this way, we expect to attain sustainability for future community development initiatives.

We have been running workshops to train local people in different pest control techniques without the use of aggressive agrochemical products. Now several farmers are keen to produce organic products and we are working with them to gain governmental certification. This will open up new and lucrative markets for the farmers.

We run workshops to train local people in tourism; improving their knowledge and skills to give them the confidence to attend to visitors and independently run the ecotourism project at the Red-fronted Macaw Nature Reserve. This provides an alternative, extra income for the 3 indigenous communities that co-run the project and split the profits. It is empowering them through entrepreneurship, while generating direct financial benefits from conserving macaws and their habitat. 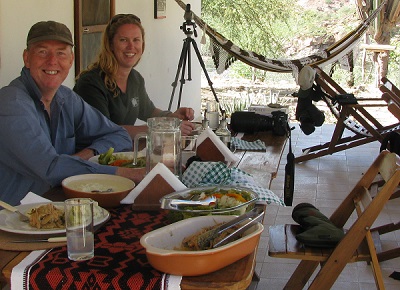 The Red-fronted Macaw Reserve is a haven for nature lovers, as the spectacular sheer cliffs of the Andean valleys provide a backdrop to a unique wildlife-watching experience. Hoards of charismatic Red-fronted Macaws nest in the cliffs, giving tourists the rare opportunity for a close encounter with an Endangered species that can be found nowhere else on Earth.

Visiting the reserve is also an opportunity for tourists to explore its archaeological sites, as well as the rock paintings across the region. It is a chance to discover the culture and traditions of the Quechua indigenous communities who co-run the ecotourism project. Over the years we have witnessed how these poor people, who have been marginalized by society, have grown in confidence and gained greater pride in their cultural heritage thanks to the interest and respect shown by tourists.

The Red-fronted Macaw Nature Reserve is a peaceful haven for wildlife lovers and by visiting it you will be directly helping to save this emblematic macaw, while empowering poor and marginalized indigenous communities.

If you would like more information of visiting the Red-fronted Macaw Reserve, please visit our ecotourism section » 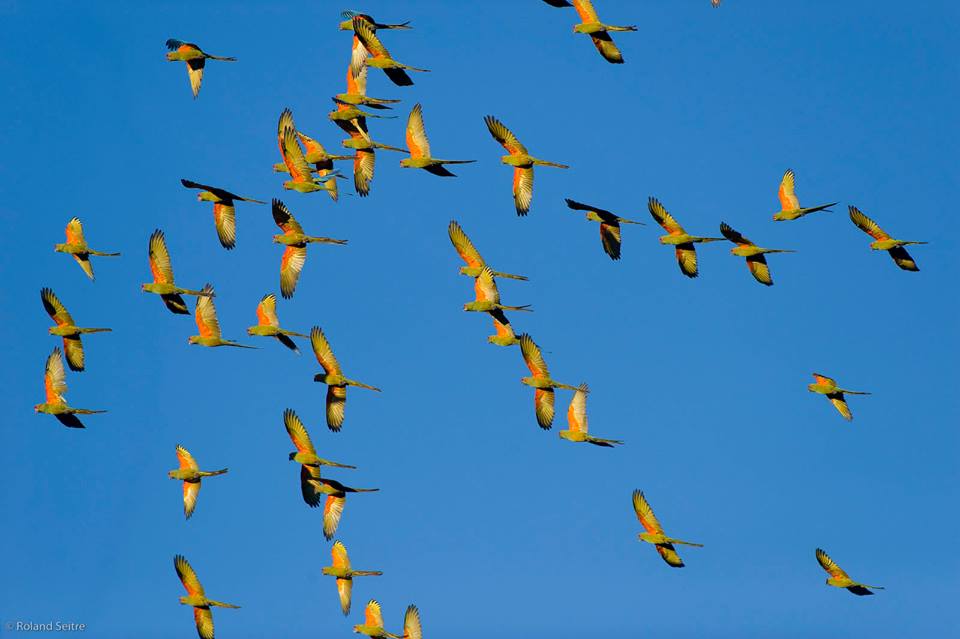 Flock of 43 Red-fronted Macaws over the reserve. (Photo: Roland Seitre)

The Red-fronted Macaw program has achieved many successes, but it urgently needs greater support to fund the ongoing protection of the reserve, to tackle the illegal pet trade, and to help support the indigenous communities.

If you would like to support the Red-fronted Macaw program – to save this emblematic species and empower indigenous people – please donate.

We thank our international partners and individual donors for the achievements of Red-fronted Macaw program – we cannot save the species or empower our people without your generous support. Thank you.