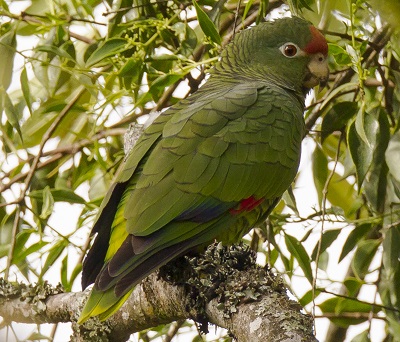 Saving the Tucumán Parrot from extinction, by protecting its threatened cloud forest and tackling the illegal pet trade

The Tucumán Parrot (Amazona tucumana) is globally threatened and only found in the Yungas forest eco-region; a narrow strip of cloud forest in the Andes of southern Bolivia and north-western Argentina. Its population is estimated at only 9,000 birds, with numbers declining rapidly due to habitat loss and capture for the illegal pet trade.

In Argentina, over 60% of the Yungas forests have disappeared and the remaining Tucumán Parrot habitat is highly degraded and occurs in small, isolated forest fragments. In Bolivia, where the largest fragments of suitable habitat remain, the Yungas forest ecosystem is threatened by escalating forest destruction to create agricultural land.

Illegal capture for the pet trade continues in Bolivia and nest trees are usually cut down to collect chicks, driving the species to extinction. Here at Armonía, the team know that we must inspire behavior change across Bolivia if we are to protect the Tucumán Parrot into the future.

But many people in the country live in desperate poverty and the price a bird can fetch on the illegal pet trade market is too great a reward to miss. By working in collaboration with local communities, we are striving to find the solution.

The main 3 ways that Armonía is protecting the species from extinction, is by:

If you would like to support the Tucumán Parrot program – to save this threatened species and its habitat – please donate.

In the cloud forests of southern Bolivia, Armonía has created the Amazon Tucumán Nature Reserve to protect the highest density of nests in the region. This reserve sits alongside the community-run Laguna Esmeralda Reserve, providing a greater safe haven for the species. We are working with the Quirusillas community to help develop a conservation and management plan for their reserve, giving local people the expertise to protect the parrot and its forest into the future.

Armonía will install at least 30 artificial nests within the two reserves by August 2015 and monitor the impact of the nest boxes on the reproductive success of the Tucumán Parrot. This could significantly increase population numbers of the species to help secure its survival.

Armonía has been working with 9 communities to raise awareness and build support for the protection of the Tucumán Parrot and its habitat. In 2009, the Quirusillas community recognized the Tucumán Parrot as a natural heritage symbol and its image is now included as the central figure in the municipal coat of arms. While the mayor of Quirusillas signed a declaration to support a ban on the parrots’ capture and trade.

Instilling a sense of local pride in the Tucumán Parrot could be crucial in saving the species. We have achieved great success with campaigning in the past, having significantly reduced the illegal trade in Blue-throated Macaws across the country. The people of Bolivia now consider is shameful to be trading in the species. While in 2014, the national government declared the Blue-throated Macaw a national heritage species, giving it greater legal protection.

With the right support, we are confident that we can achieve this same level of success with the Tucumán Parrot and secure the future of the species.

The Tucumán Parrot program has achieved many successes, but further work is needed to step up conservation measures and secure the protection of the species forever.

The program urgently needs support to fund the ongoing protection of the Tucumán Parrot Nature Reserve, to continue the nest box program, to conduct nationwide education programmes on the illegal trade that continues in Bolivia.

If you would like to support the Tucumán Parrot program – to save this emblematic species and a wealth of other wildlife – please donate.