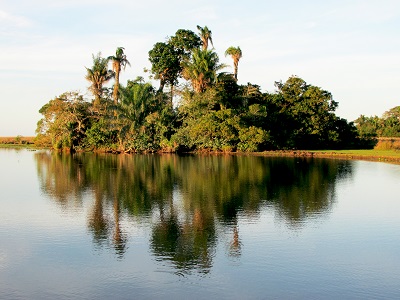 Protecting the Beni Savanna of Bolivia: an endemic habitat that is Critically Endangered and home to a wealth of threatened species

The Beni Savanna, an area twice the size of Portugal in remote northern Bolivia, is almost entirely ranched and its grassland habitat is burnt every year to clear the way for cattle.

In 2008, Armonía established the Barba Azul Nature Reserve and in doing so we created the world’s first protected area for the Critically Endangered Blue-throated Macaw, safeguarded the most important Buff-breasted Sandpiper migration stop-over site in Bolivia, and saved large areas of old growth savanna that harbor a wealth of endangered and endemic wildlife.

The savanna and palm forested islands of the Barba Azul Nature Reserve stretch across 27,180 acres (11,000 hectares) and are a safe haven for Jaguars, Pumas, Maned Wolves, Ocelots, Giant Anteaters and Black Howler Monkeys – to name just a few of the impressive mammal species that are found here.

The reserve is also home to 315 bird species, with records of 179 birds seen in a day. The tall grasses of the reserve protect rare savanna species, like the Cock-tailed Tyrant, Sharp-tailed Tyrant and Black-masked Finch, as well as abundant populations of the Near Threatened Orinoco Goose and Greater Rhea.

Yet the Beni Savanna and its wealth of wildlife is under threat. The forests surrounding the reserve suffer from logging and cattle ranching. The grasslands are depleted by overgrazing and regular burning. We are keen to increase the size of reserve to save this Critically Endangered habitat from destruction and create a greater safe haven for wildlife.

Discover the 4 main ways that Armonía in protecting the endemic Beni Savanna:

If you would like to support the Barba Azul Nature Reserve program – to protect the Beni Savanna and its wealth of threatened wildlife – please donate. 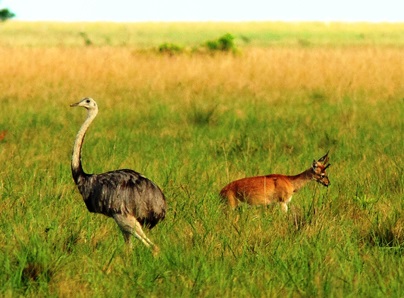 The Beni Savanna is Critically Endangered and the Barba Azul Nature Reserve is the only protected area in this ecosystem that is safeguarded from cattle and fire.

This ecoregion contains 5 distinctive habitats: savanna, treed savanna (cerrado), forest islands, gallery forests and marsh wetlands. But after years of logging, hunting and cattle ranching this ecosystem has been greatly altered by overgrazing, annual burning and the planting of exotic grass species.

A land of extreme contrasts, the Beni Savanna undergoes intensive flooding in the summer and months of drought in the winter. It is crossed by three major rivers, which flow into the Madeira River, the major southern tributary of the Amazon. Yet the Omi River within the reserve is the only year round water source for a massive area, so many mammals depend on this clean water through the dry season.

The Barba Azul reserve has been recognized as the most important migration stop-over site for the Buff-breasted Sandpiper in Bolivia, a species that is considered Highly Imperiled in the U.S. shorebird conservation plan. The reserve is home to a total of 288 bird species, with the tall grass providing a protective cover to shelter species that are Vulnerable to Extinction, such as the Cock-tailed Tyrant and Black-masked Finch, as well as abundant populations of the Near Threatened Orinoco Goose and Greater Rhea.

There are at least 27 species of medium and large mammals that depend on the protected habitat of Barba Azul, including the Giant Anteater and Marsh Deer that are Vulnerable to Extinction, as well as many other threatened mammals such as Maned Wolf, Jaguar, Puma, Pampas Deer, White-collared Peccary and Capybara.

We are keen to increase the size of reserve to create a greater safe haven for this wealth of wildlife and save this Critically Endangered habitat from destruction. 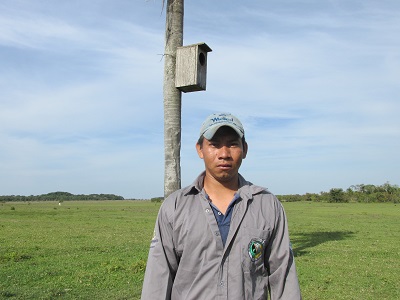 Keepers of the Wild: ranger program

It is impossible to ensure the long-term, ongoing protection of the Barba Azul Nature Reserve without employing reserve rangers, who are out in the field physically protecting the Beni Savanna and its wildlife. Our ranger Rene Cartagena is one member of a dedicated and hard-working team.

Rene was born in the nearby Tacana indigenous village, where the Amazon Rainforest reaches the Beni tropical savannas. He was very keen to work for Armonía to help protect the Barba Azul Nature Reserve, close to where he grew up. Rene says:

“It is important to me to be in a natural and peaceful place, working to provide for my family while helping to protect threatened species.”

The major problems that face the reserve are hunting, cattle and fires. Rene and his co-worker Rosario play a vital role in tackling these issues by patrolling the reserve, removing invading cattle, maintaining firebreaks and fences, clearing trails and assisting researchers.

We thank our UK partners, the World Land Trust, who fund Rene’s salary and equipment through their Keepers of the Wild program. 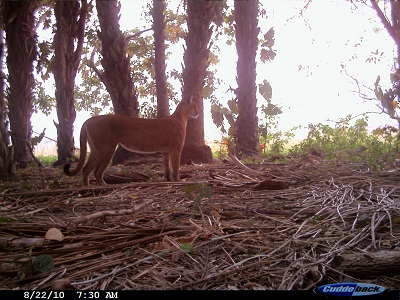 The Barba Azul Nature Reserve attracts scientific researchers from across the world, who contribute extensively to the knowledge of this understudied savanna habitat and its species.

For many years, we have supported and facilitated students from Glasgow University to carry out their research expedition within the reserve.

Among their many areas of study, the students have undertaken camera-trap monitoring of mammals to capture images and videos of the reserve’s more elusive wildlife so that population trends can be monitored.

Their numerous studies have established both the importance of the reserve for key conservation species, while also providing a baseline for the future monitoring and study over time.

“My luckiest encounter so far (and also my scariest) was coming into contact with a Puma while out with a survey team in the forest. We’d seen nothing all night – and now we know why. We were returning home when a fearsome growl erupted from the bushes. Time to back off slowly!

“When we checked the forest camera traps in the morning we found pictures of a big adult male that must have followed us for a while.

“The presence of top predators is a great sign, indicating that the ecosystem is healthy enough to support them. It means the hard work that Armonía is doing within the Barba Azul Nature Reserve is really making a difference.”

Armonía welcomes scientific researchers to Barba Azul’s research station, so please contact us if you are interested. 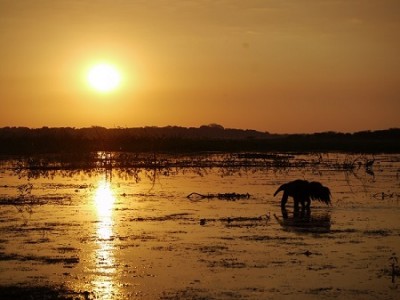 The Barba Azul Reserve is a haven for nature lovers, as these palm forested islands at the foot of the Amazon basin offer a wildlife watching experience like no other.

Hoards of charismatic Blue-throated Macaws can be seen at the reserve, giving tourists the rare opportunity to spend time in the wild with a Critically Endangered species that can be found nowhere else on Earth.

The reserve provides a safe haven for a wealth of other threatened birds species, as well as beginning to attract more regular sightings of enigmatic mammals – such as Pampa Deer, Giant Anteater and Manned Wolf.

By visiting the reserve, tourists contribute directly to the ongoing conservation of this unique savanna habitat and its wildlife. If you would like more information about visiting the Barba Azul Nature Reserve, please visit our ecotourism section »

The Barba Azul Nature Reserve program has achieved great successes, but must continue its conservation efforts to save the Beni Savanna from destruction.

The program urgently needs support to increase the size of the reserve, to fund reserve rangers to protect it, and to attract visitors that will support its ongoing conservation.

If you would like to support the Barba Azul Nature Reserve program – to safeguard this Critically Endangered habitat and its wealth of wildlife – please donate.

We thank our international partners and individual donors for the achievements of Barba Azul Nature Reserve program – we cannot save the species or empower our people without your generous support. Thank you.