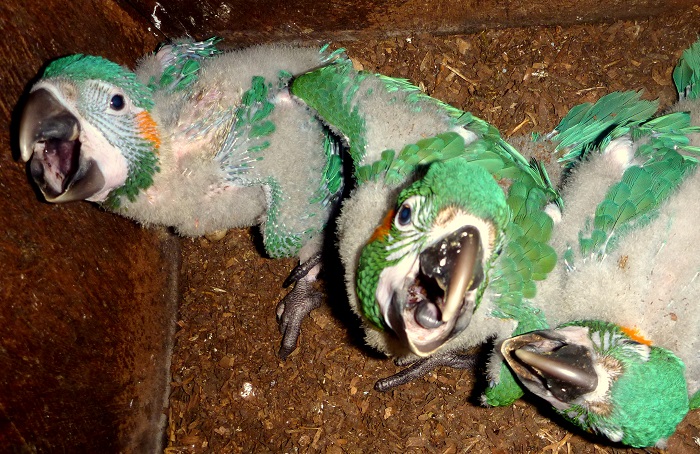 This is fantastic news for a Critically Endangered species that is being driven to the edge of extinction.

One of the main factors halting the recuperation of this species has been the lack of potential nesting sites and competition with the more common and abundant Blue-and-Yellow Macaw (Ara ararauna).

The macaws need trees with large cavities in their trunks to nest within, but 150 years of intensive cattle ranching in the region has cleared most old growth, large trees.

Since 2005, here at Armonía we have been tackling the problem by installing artificial nest boxes in the hope of enticing the macaws to breed successfully. 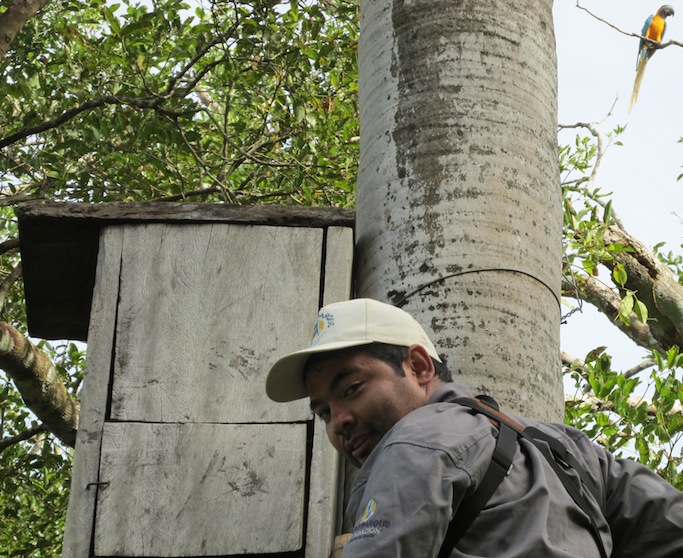 Our conservation coordinator reviews a nest box, under the watchful eye of a Blue-throated Macaw

We have spent 10 years experimenting with the size, shape, design, material and location of the nest boxes. This hard work has paid off, as every year chicks have successfully fledged from the nest boxes.

Despite this, a problem still remains: the chicks only fledge from nest boxes located south of the Barba Azul Nature Reserve and the macaws have never bred successfully within the protected area.

The reserve was created in 2008 and was the first ever protected area for the Blue-throated Macaw, a species that can only be found in the Beni Savanna of northern Bolivia and nowhere else on Earth.

Although Blue-throated Macaws spend half the year foraging and roosting in the Barba Azul Nature Reserve, they are not breeding in the safety of the protected area. Instead, the pairs tended to disperse widely throughout the region’s farmland in search of a suitable site.

In 2014, we installed more than 40 boxes within the sanctuary of the Tiniji River forest islands on the reserves. We carefully selected this location as it was already a popular roosting area, so the birds know that it’s safe.

Now, it is a waiting game – it could take a long time for the macaws to try out their new nests.

Having said that, we know that Blue-throated Macaws are intelligent birds and much of their behavior is learned from their parents, their environment, and the behavior of others. So we are confident that once one pair of macaws successfully breed in the boxes, then their offspring and other adult birds would watch, learn and copy.

Despite not breeding within the reserve, we are still delighted that in 2013-14 we saw 7 chicks fledge from the nest boxes, and during the next breeding season in 2015, other 10 chicks flew out from their artificial cradles.

Crucial to this success is that we have designed a nest box that appears to be unpopular with the Yellow-and-Blue Macaw. Bennett Hennessey, director of Armonía, explains:

“Although the Blue-and-Yellow Macaw is a lovely animal, and deserves to breed and be happy, it is also a plentiful macaw found throughout South America and Central America and in many places in large numbers. Whereas the Blue-throated Macaw, Critically Endangered, is only found here in the Beni Savannas of Bolivia.

It is imperative we do everything possible to help the Blue-throated Macaw, and one of the ways we can do this, is by not helping the Blue-and-Yellow Macaw. So although we are seeing fewer nest boxes being used this season – which would appear to be a bad thing – we are actually seeing less of the undesirable species using the nest boxes and more of the focal species using the boxes.”

We wait with anticipation for the next breeding season. We would like to thank our generous supporters for this achievement, with major contributions coming from: Loro Parque Fundación, Bird Endowment, Cincinnati Zoo & Botanical Garden, Mohamed bin Zayed Species Conservation Fund, World Land Trust and the British Birdfair through BirdLife International.