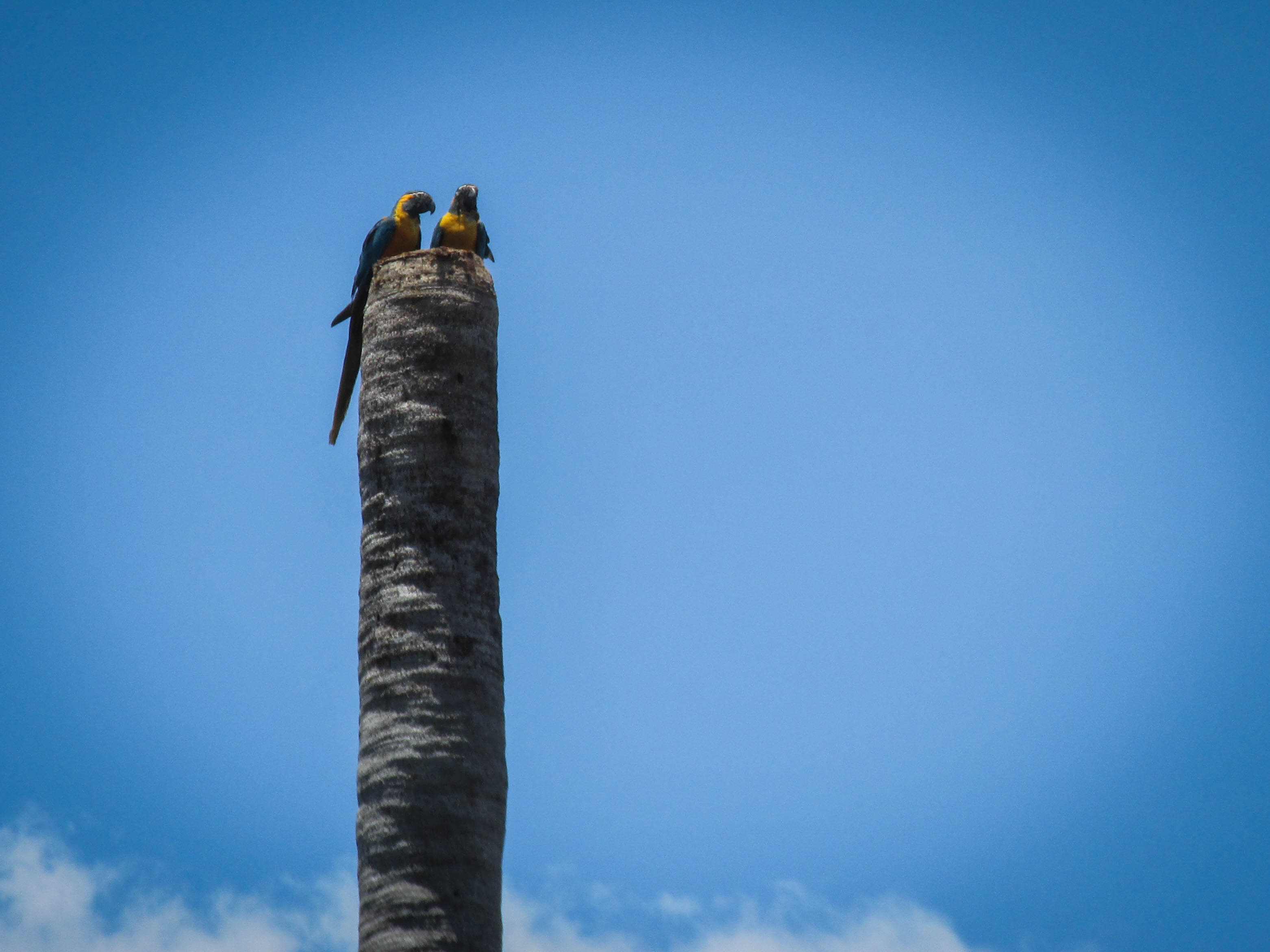 In early February, an Armonía expedition discovered a new breeding area of the Critically Endangered Blue-throated Macaw (Ara glaucogularis). The groundbreaking discovery is a major step towards understanding the life cycle of the macaw and most importantly, to ensure the specie’s full protection.

Since 2008, Armonía has been protecting key roosting and feeding grounds of the largest wild Blue-throated Macaw population at Barba Azul Nature Reserve. Recent sightings of a record-high of 118 macaws indicates a healthy increase of the macaw population at the reserve. However, the majority of these birds only use Barba Azul from May to November.  At the beginning of the breeding season the macaws appear to disperse to unknown sites, returning to Barba Azul in small groups in March. The question remains: Where do all these birds breed?

In January 2016, conservation program manager Gustavo Sánchez Ávila discovered 15 roosting birds north from Barba Azul Nature Reserve during an expedition supported by Loro Parque Fundación. With this evidence in hand, Armonía with support from American Bird Conservancy and The Cincinnati Zoo kicked of the search for breeding grounds to the north.

The nesting period of the Blue-throated Macaw coincides with the region’s November to April rainy season.  During this time, the Beni savanna is mostly flooded. Inundations halt most vehicular traffic to these areas, therefore the Armonía expedition had no other choice but to venture into this wilderness on horseback! 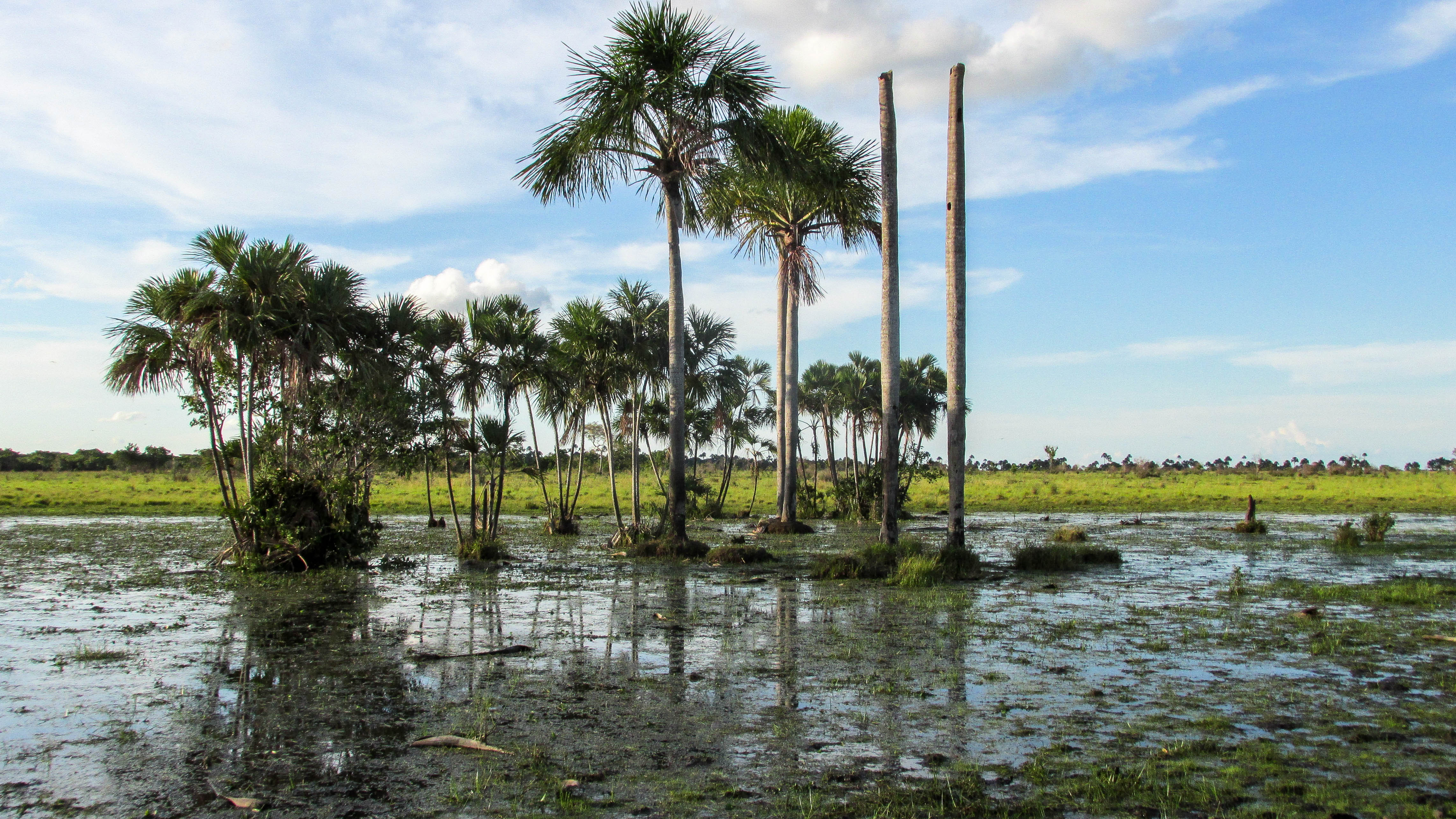 The nesting period of the Blue-throated Macaw coincides with the region’s November to April rainy season. During this time, the Beni savanna is mostly flooded.(Photo: Tjalle Boorsma)

A demanding 130 km (70 miles) horse ride led the team deep into the flooded grasslands.  Initially, the field team focused their searches on Motacú forest islands, as in Barba Azul the Blue-throated Macaw prefers this palm.  The macaws forage on the abundant, year-round available fruits of the Motacú palm (Attalea phalerata).  A total of 31 Motacú dominated forest islands were surveyed with few results. However, 16 birds were again observed at the Motacú roosting island, previously discovered in 2016.

“We registered a significant number of Blue-and-Yellow Macaws (Ara ararauna) in the area, but to our surprise the Motacú dominated forest island showed no signs of Blue-throated Macaws” – Boorsma said.

“The breakthrough happened when we sighted a pair of Blue-throated Macaws flushing from an elongated patch of Royal palms (Mauritia flexuosa). The discovery gave a new scope to the whole expedition.”

Contrary to previous beliefs, instead of Motacú, the birds were found perching on dry Royal palm snags. These palm patches were of difficult to access, as they were flooded due to recent rainfall. This natural barrier could very well be the reason that the macaws choose these palm snags for hosting their nesting cavities. 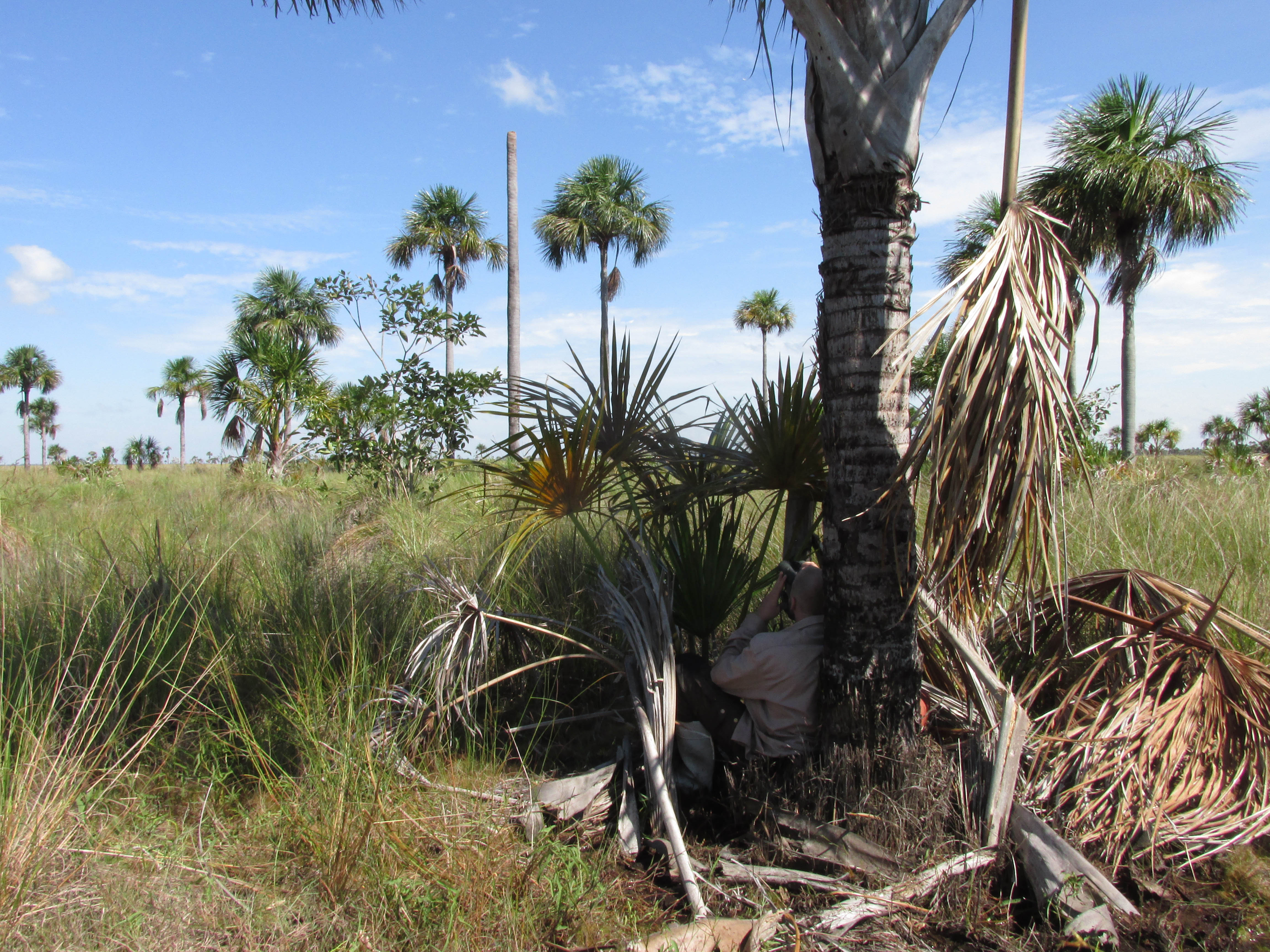 To confirm that the Blue-throated Macaws were indeed using these cavities for nesting, Tjalle concealed himself in a make-shift palm blind. (Photo: Luis Miguel Ortega)

To confirm that the Blue-throated Macaws were indeed using these cavities for nesting, Tjalle concealed himself in a make-shift palm blind.  After six hours of patient waiting, he observed the cautious Blue-throated Macaw pair return to the nest.  This activity confirmed that the cavity was indeed being used as a nesting site.  A second nest was later discovered in another dead Royal palm trunk.  This was followed by the discovery of two more nests in Totaí palms (Acrocomia aculeata).

“Finding the nests in Royal palm and Totaí delivered the missing piece to complete our investigations. Now we definitively know that the Blue-throated Macaw prefers Totaí and Royal palms to nest in, as dead palm snags provide excellent vantage point to observe their surroundings.”

– detailed the findings of the expedition Boorsma. After verifying that the birds are not disturbed by the presence of our drone, we used the remotely piloted vehicle to film them.

In case of an accessible nest, Boorsma could verify that the cavities in the palms actually held a Blue-throated Macaw nest. Surprisingly, in the case of the two nests in Totaí palms, the birds chose locations 50 meters (164 feet) away from a populated farm and showed no signs of disturbance from its proximity to humans and livestock.

“Nests were dispersed along pretty much the same latitude, at a distance of 10-12 kilometers (7,4 miles), generally located to a comfortable daily flying distance from the boundaries of Barba Azul Nature Reserve. “

-added Boorsma.  “At this point it would be too early to speculate whether the birds found during this expedition are from the same colony which visits Barba Azul Nature Reserve in the dry season, or they constitute a separate population” – underscored Boorsma.

To answer this, and many other pending questions about the breeding habitats of the Blue-throated Macaw, Armonía and ABC will launch a second expedition into the Beni savannah later this March. Alongside our team in the field, a group of experts led by Lisa Davenport are in the process of designing macaw-proof GPS-units, so that tagged birds can be traced during their seasonal migrations.

Given this new information on the local breeding habitat of the Blue-throated Macaw, Armonia will adjust its nest box program at Barba Azul Nature Reserve to include much higher elevated nest boxes, with isolated palms imitating the nest of this region. We need financial support for this project. Please consider supporting our conservation effort with your donation.