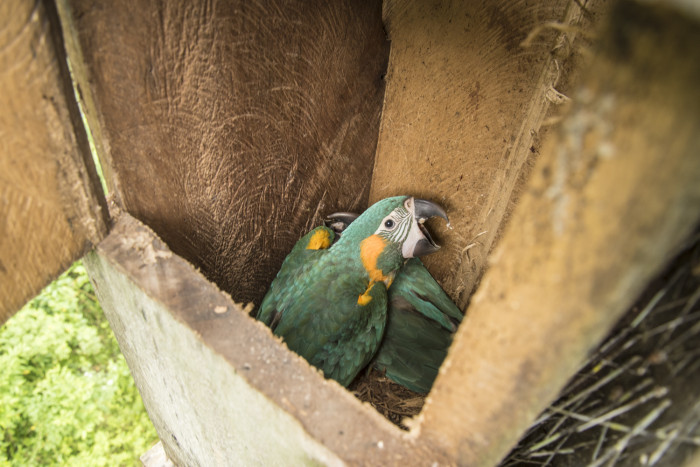 This year nine Critically Endangered Blue-throated Macaw chicks have successfully hatched from Armonia’s nest box program. The news is especially encouraging as this is the first time we recorded a chick whose both parents had also fledged from nest boxes. .This clearly shows Blue-throated Macaws are learning to identify nest boxes as a safe place to breed.

The main factor halting the recuperation of the Blue-throated Macaw has been the lack of potential nesting places. The macaws need trees with spacious cavities to nest within, but 150 years of cattle ranching in the Beni Savanna has cleared most of the large trees.

With support from the Loro Parque Fundación, Bird Endowment – Nido Adoptivo – El Beni-Factor ™ and the Mohammed bin Zayed Conservation Fund, Armonía has been installing constantly improved nest boxes in the Southern area of the Macaws habitat attempting to offer a better breeding environment to the Blue-throated Macaws.

Macaws are intelligent birds and much of their behavior is learned from their parents. We are confident that once a macaw pair breeds in a nest box, their offspring will learn this behaviour.

The most important event this year is the confirmed first record of a second generation of Blue-throated Macaws being bred in our nest boxes.  Both parents of this chick fledged from Armonía’s nest boxes seven years ago, now returning to raise their own offspring.

This proves that Macaws fledged from a nest box are in fact learning and copying the breeding behavior of their parents and are prone to use next boxes themselves. 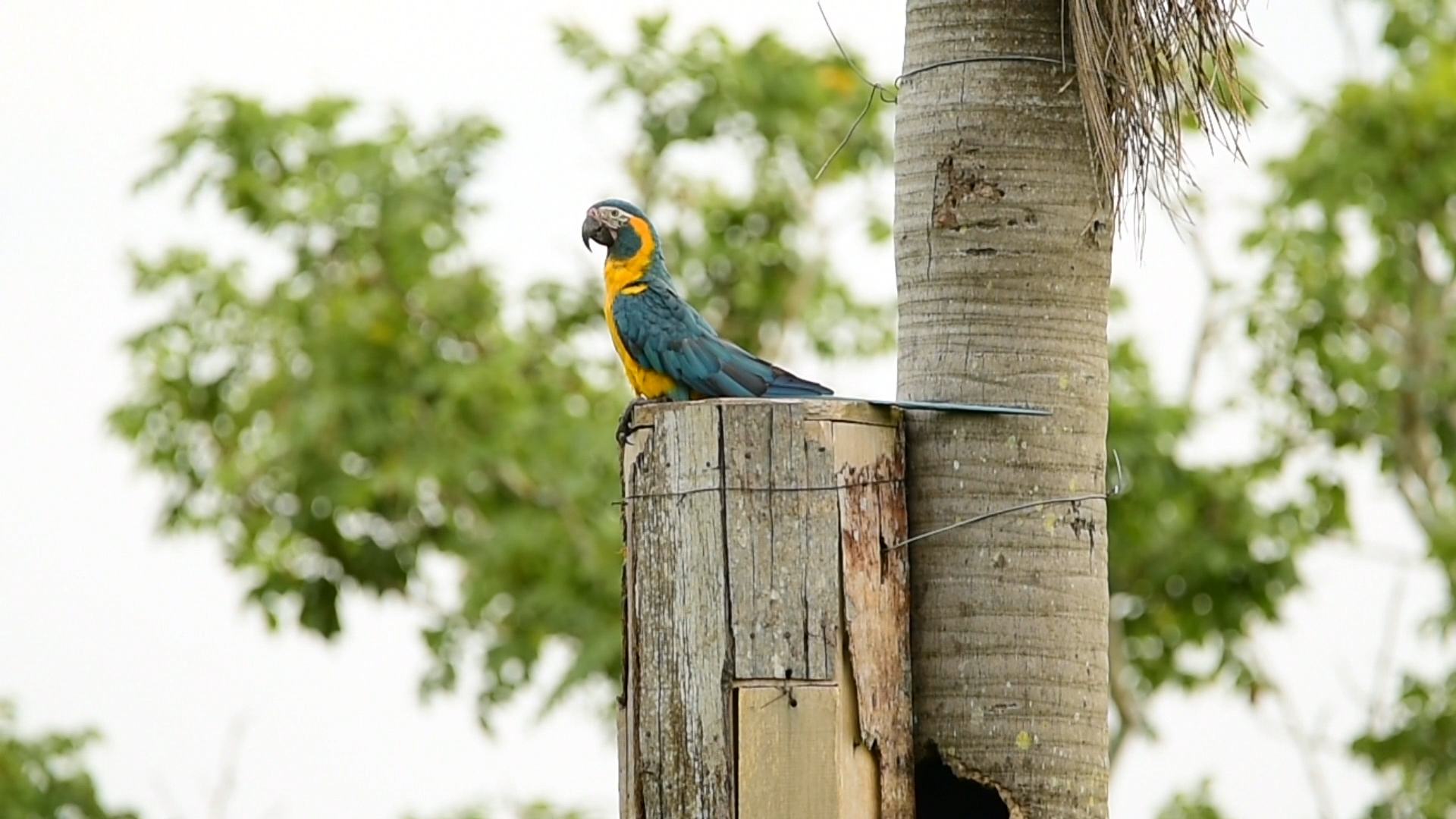 We believe that with time Macaws will adjust to the presence of the artificial cavities. (Photo: Adian Maccormick)

After eleven breeding seasons a total of 71 Blue-throated Macaws fledged from our nest boxes. Given that estimations of this species population indicate there are less than 250 mature individuals left in the wild, the impact of Armonía’s conservation actions is significant.

In 2014, Armonía installed 67 nest boxes in a sanctuary of the Tiniji River forest islands, identified as a potentially successful breeding site within the Barba Azul Nature Reserve. Although Macaws spend most of the year foraging and roosting in Barba Azul Nature Reserve, they do not breed in this protected area. We believe that with time Macaws will adjust to the presence of the artificial cavities. It will be a significant breakthrough to ensure the survival of the species. 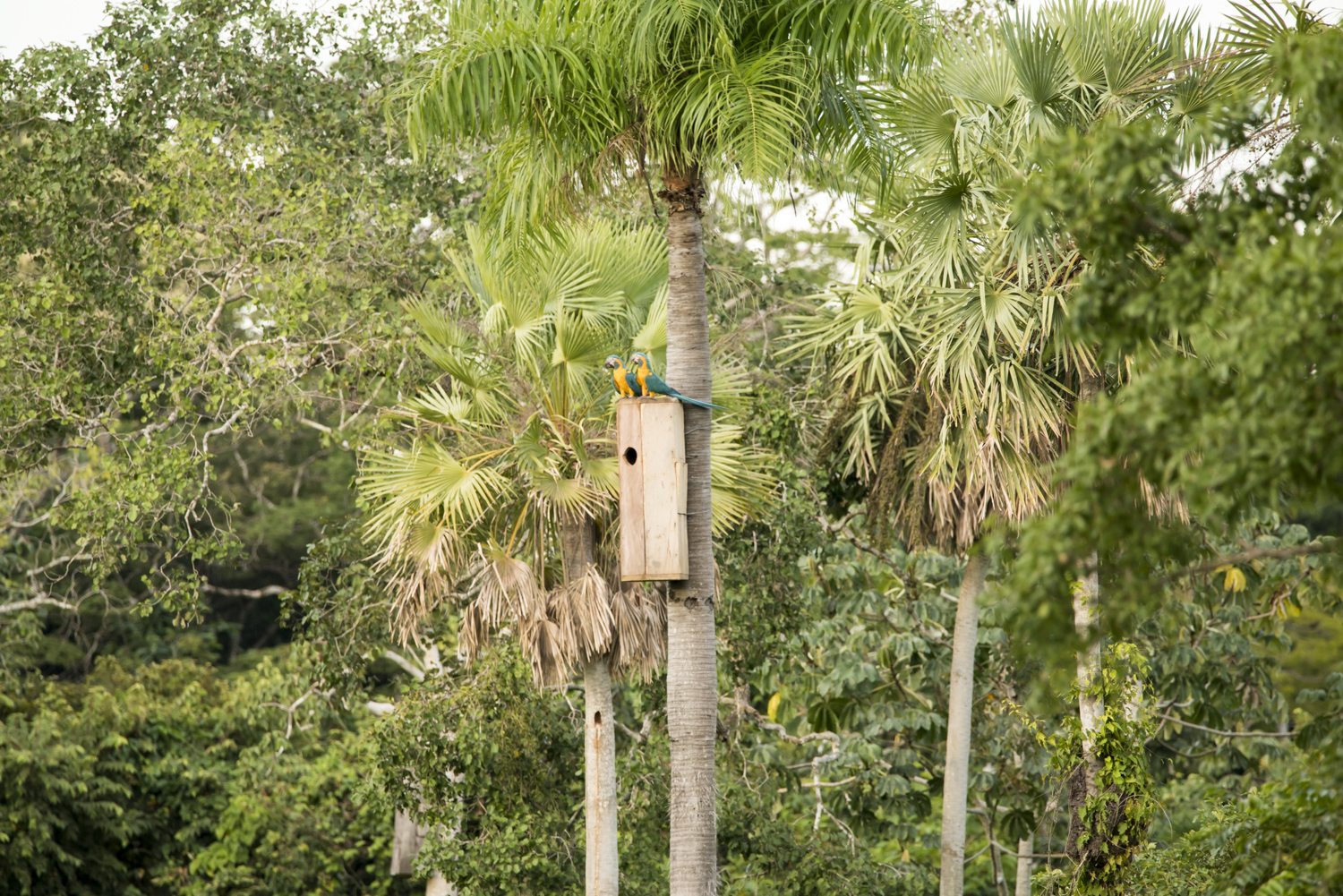 Both parents of this chick fledged from Armonía’s nest boxes seven years ago, now returning to raise their own offspring. (Photo: Aidan Maccormick)

With the new discovery of breeding Blue-throated Macaw’s north of Barba Azul, Armonía has better information on the learned preferred nesting sites of these northern birds. In 2017 we will be working to adjust our nest boxes to simulate these nest types, which are taller and more isolated. Please consider supporting this activity and our conservation work with a donation.