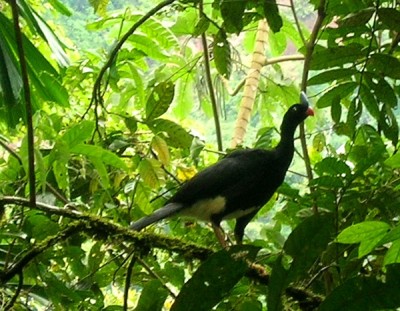 Saving the Horned Curassow, a Critically Endangered species that is only found in Bolivia, from the edge of extinction

The Horned Curassow (Pauxi unicornis) is the most threatened bird species in Bolivia. Without a strong conservation program, extinction of this curassow is imminent. In the next 10 years, nearly 90% of the forest that the species needs to survive is set to be destroyed. The Horned Curassow is classified as Critically Endangered because of this high level of habitat loss and hunting.

Coca cultivations are growing 10% a year, mostly along the Andean foothill habitat within Bolivia’s national parks. Added to this, the government recently announced a plan to build a highway through the middle of the Isiboro-Sécure National Park and Indigenous Territory, which is suspected to hold the largest remaining Horned Curassow population in the world.

Given this scenario, we believe the southern population in Amboró National Park in the department of Santa Cruz is our last hope for preserving a viable Horned Curassow population in the wild.

The 3 main ways that Armonía is saving the Horned Curassow and its forests, by working within the Amboró National Park, are through:

Through the Horned Curassow program, we will develop ecotourism infrastructure in Amboró National Park to generate an extra, alternative income for local communities. We have had previous success at coupling environmental protection and ecotourism in a way that empowers and supports local people through our Red-fronted Macaw program. We are confident that by learning from this positive experience, we can achieve the same success with the Horned Curassow program.

We will also create a captive breeding facility in the area; curassows have shown to reproduce with ease in captivity if they are given proper care. We would capture birds from foothill forest areas destined to be cut for coca production. Local people will be trained to manage the captive breeding program; from our experience of working with communities across Bolivia, we have learnt that people feel empowered and engaged when they become actively involved in the conservation of the species.

To reinforce local communities’ engagement, we will carry out an educational and pride campaign within the Amboro area, highlighting the fact that this is the last site for the species in the wild and only the local people can save the Horned Curassow from extinction. Again, we have had great success at creating behavior change through educational campaigns, shown through the achievements of the Blue-throated Macaw program that is tackling the illegal pet trade across Bolivia.

Given that the local communities are presently protecting the park better than the government, a well-run program with the economic benefit of tourism has a high level of success.

If you would like to support the Horned Curassow program – to save this Critically Endangered species and help support local communities – please donate.