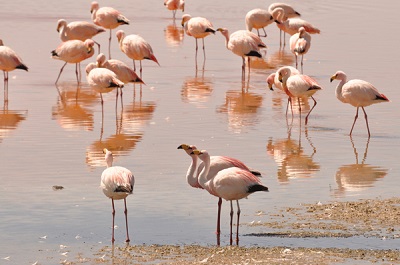 High Andean wetlands face sever human pressures that contaminate their waters. Climate change is also affecting numerous shallow wetlands, reducing the availability of key habitat for numerous aquatic migrant species that visit these sites every year, as well as resident species that depend on these wetlands throughout the year. This makes it vital to identify the most important wetlands to implement effective protection measures from human activities and climate change.

In 2013, Amonía began a monitoring program to obtain population sizes and the diversity of aquatic migrant and resident bird species in several high Andean wetlands and lakes. Our findings indicate that some migrants are abundant in the southernmost wetlands of Bolivia, with populations larger than 8,000 individuals, while the diversity of aquatic birds is higher at lower altitudes in the central Andes of Bolivia.

The Puna Flamingo, for example, was abundant at Laguna Colorada with a population of 17,000 individuals; this is 17% of its estimated global population in one single site, making it an important wetland for the Near Threatened species. The Andean Flamingo, a species that is Vulnerable of extinction, was less abundant but at several other wetlands sites we found populations that numbered between 200 to 500 individuals .

In 2015, we conducted censuses of aquatic bird species in 15 wetlands in the Bolivian high Andes. The program is being carried out thanks to the support of the Canadian Wildlife Service and BirdLife International.

We are very keen to continue our monitoring program to better understand the threats that face high Andean wetlands and their wildlife.

If you would like to support the High Andean Wetlands program then please donate.